A downloadable game for Windows and macOS

NEXT GAME IN DEVELOPMENT! Go wishlist In Stars and Time, coming in 2023 :)

You're fine though! Hiding your knowledge from your friends is easy! Fighting the same enemies is easy! Dying to the same final boss over and over again is easy!

You have to make sure your friends don't find out about the super fun times you're having  though.

🕒 NOTE FOR MAC USERS: RPGmaker games don't play nice with macs! START AGAIN: a prologue has a mac version available, but I've been told it doesn't work with M1 models and might be a little shaky on others. You might still be able to play and you'll be able to save but I just want people to be aware! Don't forget to read the HOW TO file that's included in the zip file!

TLDR: a whole short game baybee!
Long version: I intend to tell this little fella's whole story, but first I wanted to make a demo to figure out the world and characters and how this rpgmaker thing even works. But my hubris has betrayed me once again and this demo is now a full short game with a start middle and end!!! Oh no!!! What luck!!!

You can check out the whole story in In Stars and Time, coming in 2023~!

"not heck yeah actually! i have a bug! "

Please reply to this post and let me know!!!

In order to download this game you must purchase it at or above the minimum price of $12 CAD. You will get access to the following files:

Genuinely I think this game altered my brain chemistry in the best way. Every line of text, from character dialogue to idle flavor text is a master class in ambient but impactful storytelling. Also as someone who plays their fair share of RPG’s, the combat system this game presents is so fresh and fun that I was genuinely enjoying myself each and every time I ran into an enemy. The characters were all so deeply lovable and instantly endearing even just from the first few lines, to the point where you feel like you know and love them as fully realized people by the end. And (I probably shouldn’t admit it) but Siffrin’s struggles and journey through the game was impactful and deeply relatable in a way that made the whole storyline hit so much harder as the game progressed. I cannot WAIT for the full release of In Stars and Time to see all of these guys again, cannot recommend this game enough.

I played this when it first came out, and came back to it just a little bit ago with my lil sister and gosh... still hits like nobodies business  ✨

You've always been a master at narrative, the characters all have a certain life to them that invests me (gently holds picture of The Fighter), the ATB style + rock/paper/scissors matchups were fresh to me, and overall I thought it was just clean as hell. Knowing In Stars and Time is happening fills me with so much excitement I can't contain it!! 🥰

I found it way too easy to complete, though. It only took me two runs to get the true ending, which doesn't really convey Sif's soul-crushing hopelessness. When it's actually really easy to change things, it undercuts the narrative that Sif hasn't been able to change anything. If nothing else, I would expect them to just start doing things at random in desperation; that's usually what happens in time loop stories. (It's also a bit of a pet peeve of mine to have the unblockable attack do 9999 damage; it's just so obviously artificial. I don't know if it's possible in RPG Maker, but it would have been cooler if it just sent you to the game over sequence without any visible damage.)

Even given the theme of repetition, I still found the encounters too tedious, as they always are in jRPGs. I think it would be enough to make us fight the same encounters loop to loop without also making us repeat encounters within each loop.

The worldbuilding implied by the conversations is quite interesting, and the art is very nice, so I'll be interested when you complete the sequel!

AFTER SEVERAL MONTHS- I RETURN! Idk what happened between .4 and .5 but the game runs wonderfully now! (the itch.io one anyways!) and so far im having a fantastic time, this party owns my heart! im excited to see how long it takes me to figure out how to not shatter my emotions with these endings lmao

I'M GLAD IT WORKS BETTER!!! thank you for letting me know!

Thanks for the experience!!

I played the game long ago, but it's just so good I keep thinking back about all the things. The effect of tireness for the loops, the hope, the endings, the characters, the dialogue... it's all explendid. The fight system of rock/paper/scissors is really fun for going to "the basics" people try to branch with elements or whatever but in the end is just rock/paper/scissors lol

I just want the poor Sif to be happy ;_; i wonder how you will make the continuation because it is really a challenge to do a game based on loops that is not tiring for the player. This one perfectly does it imo, making you feel the tireness of the main chara but while you are not tired for playing it. So anyway well done and thank you for doing such a fantastic game!

Loved this game and all the characters. My emotions are all PUNCHED. I just want them to be happy T_T!

Are you thinking about continuing their stories at all?

their working on a sequel

I've been thinking about this game nonstop for the past two days and I've enjoyed every second of playing it. I finally finished all the endings and read through the artbook today and I am absolutely in love and also crying. Every character feels so unique and interesting and I love them all so much-- Thank you for making this amazing game!!!

Spent my entire evening playing this!

Loved it! I mean it was terribly depressing, but still loved it!

Looking forward to whatever your next project is

This deserves to be a fully fledged game with a Kickstarter and everything. The game broke my heart in the best way possible Siff deserves so much better.

def favorite bit was the part when you get the king down to like, what, 25% health? and then You Know. god. extremely powerful moment

I played it, and enjoyed it a lot! Exploring the mindset of the main character as they experience dying over and over again, trying to keep a brave face because why should everyone know how horrific their future is. All that while seeing how happy and jovial they are and being able to extrapolate what kind of relationship Sif had with the party prior to this was an incredibly succinct way both to establish the party dynamic and show just how much the situation tormented them. Seeing everyone have these fun conversations that build up their character and the world they live in, all while Sif desperately tries to keep things together and wonders what they could possibly do to change something, anything about this scenario, was simultaneously heartwarming and heart wrenching.

The gameplay was also quite interesting, with the combat being a simple but effective system that wears its functionality on its face with the Rock-Paper-Scissors effectiveness triangle blending well with the Cooldown system and interesting character Crafts. A simple system, but one that has enough moving parts to allow interesting, meaningful choices to be made to optimize in a fight, requiring the player to engage with the systems.

I got the true ending, and simultaneously adored it and was left heartbroken by it. A fantastic game, and if/when you release a follow up to this or any other kinds of stand alone work, I would play it in a heartbeat!

I played it, and it left me emotionally compromised for the evening...(in a positive way!!!) I've been looking forward to this for weeks and it gave me the exact feelings I know it would! It's well paced, the quips are fun, the art is incredible... And of course the story heart-wrenching. I love all the characters and all the details about them that's discoverable between conversations! I haven't yet find the other two endings, but right now I definitely want to process it for a while, aha. ouchie.

Spoiler-ish warning:
My favourite bit was the one where you walk back and forth single-filed and Siff comments on missing human contact but tries hard to get some without asking for it out right. That really hit hard. God, please, someone hug this caring little friend. They need it so much.

ive only got two endings and the real(?) one I think I only got by a hair but its just so lovely. love siff, love the fighter, love the housemaiden, all of them! very cool stuff going on in this game!

beautiful and absolutely heartwrenching. I connected a lot with this game and my experience in a pandemic stricken US , quarantining in my own house for almost a year when every day feels the same. I played this game for a lot longer than 3-5 hours, the writing is wonderful, giving hints about the larger world outside the boundaries of the game and the character's roles in that world, everyone feels simultaneously like an RPG archetype and an actual person. The battle system uses a simplified "types/weaknesses" system based on rock/paper/scissors with some other well balanced and handy strategy moves. I bought this game because I loved the story premise, despite disliking most battle systems in rpgs, but actually wound up having a lot of fun with this battle system.

I really hope the creator plans to do more with this premise, I fell in love with the characters and would be thrilled to see more.

Will you do a guide?

It's that it gives me the feeling that I'm doing everything wrong.

I will probably do one sometime in the next few weeks!!! I wanna leave some time for people to buy the game and figure it out :^)

I haven't completed it yet, but I'm loving it.

I love how we discover lore, history, and relationships through every detail and conversation in this game.

I don't know if it will have a happy ending or one where they suffer more than Siffrin is suffering now, but I sure like it.

It shows that you have put a lot of effort and love into the game, it shows by its great quality.

AAAAA IT LOOKS SO GOOD can't wait to meet all these little fellows !!!!

I'm SO EXCITED ABOUT THIS GAME!!!  aaaaaaaa 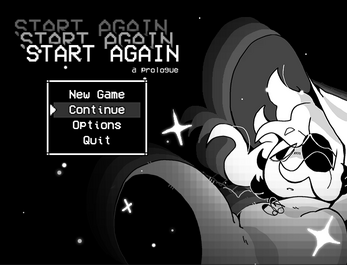 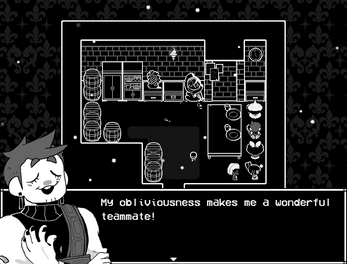 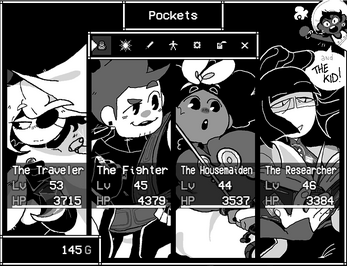 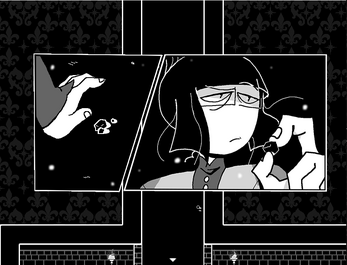 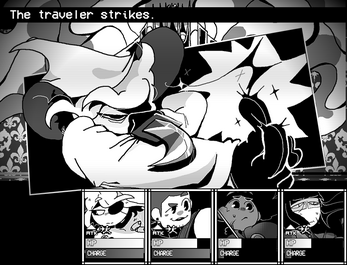 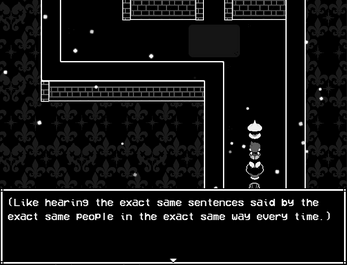 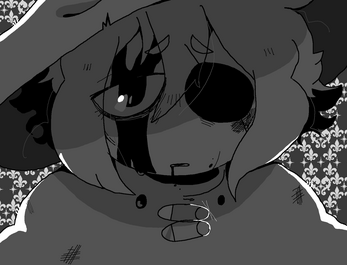