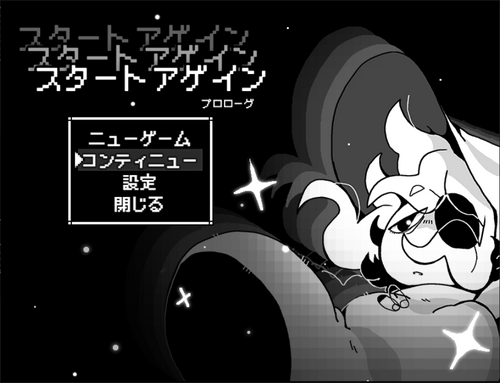 Can you believe it?!? SASASAP is now out in Japanese! Big amazing super thanks to Feral Phoenix for making it possible, along with beta testers Yuzuri Hatsuka and Maha! Thank you!!!!!

To play it in Japanese, just download the new version titled "START AGAIN a prologue_v1.5_JPN_PC". Easy as pie!

And, oh my goodness? Has it been a year since SASASAP released on itch.io already? No it hasn't. I've just decided it hasn't. Suck it, time! You're not real!!!!

Jokes aside, It has indeed been a year since the release of SASASAP. I'm still hard at work on the next and final installment which will be so much bigger. Working on things for a long time is weird. Thank you for playing SASASAP, thank you for enjoying SASASAP, thank you for drawing fanart, for talking about it, for making theories about it. Seeing people enjoy it brings me so many feelings it's hard to put them into words. Whether you played it alone, with a friend, watched someone play it on a stream, or just heard about it today, thank you so much. Thank you!!!!!